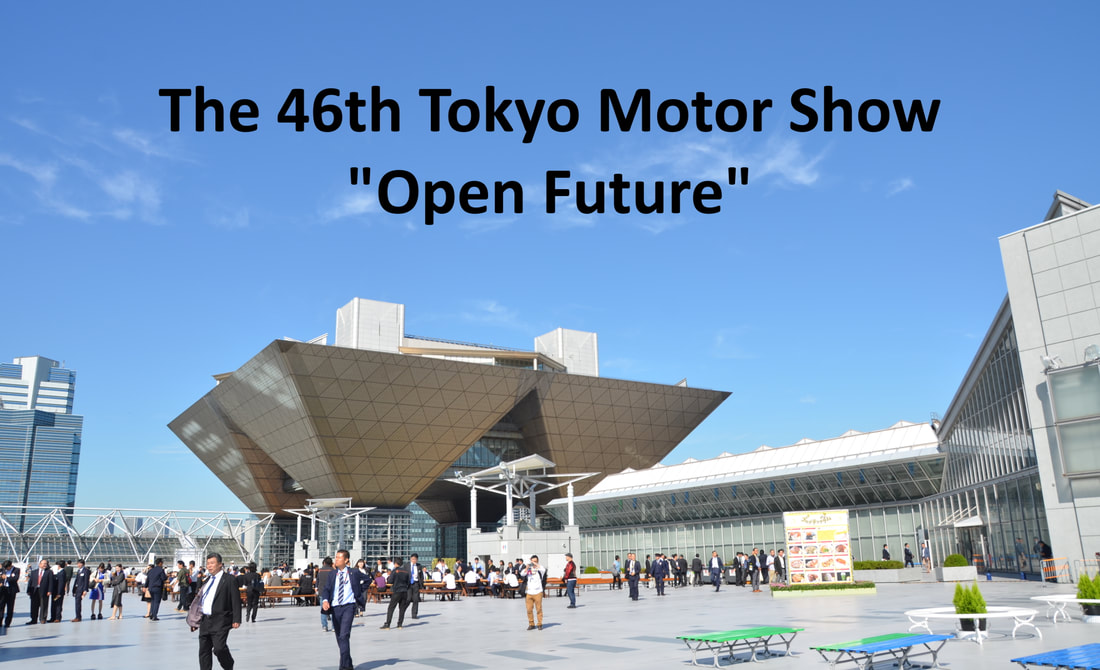 The theme for the 46th Tokyo Motor Show is "Open Future", and it couldn't be more appropriate. Everywhere you look is a peek into a future full of possibilities. Whether it's performance, safety, driver involvement or the lack of it, what future generations (or even your own) will use from Japan is probably covered in this event. Let's take a look at what could be your future... 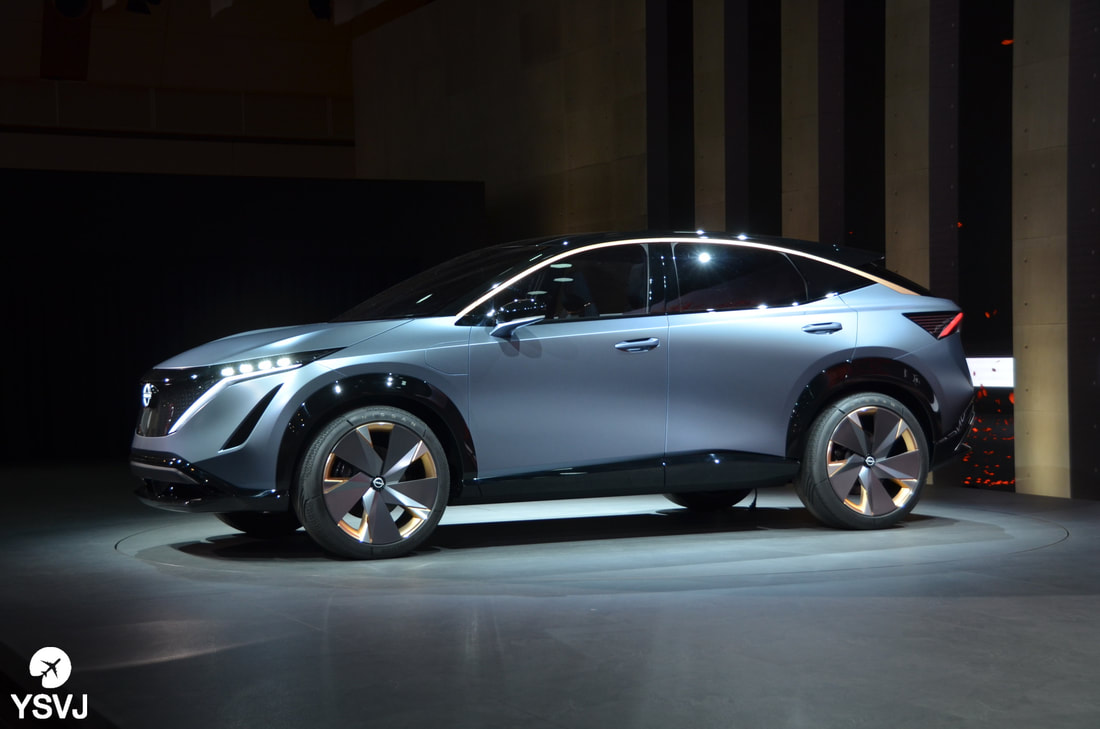 Nissan will try to combine the success it has enjoyed in the SUV market - that started in North America with the Xterra - with what it has learned about EVs with its Leaf. The Ariya EV, the follow-up to their IMx concept from the 2017 TMS, promises to bring all-wheel-drive, autonomous driving, and comfortable seating for five adults to the public soon. 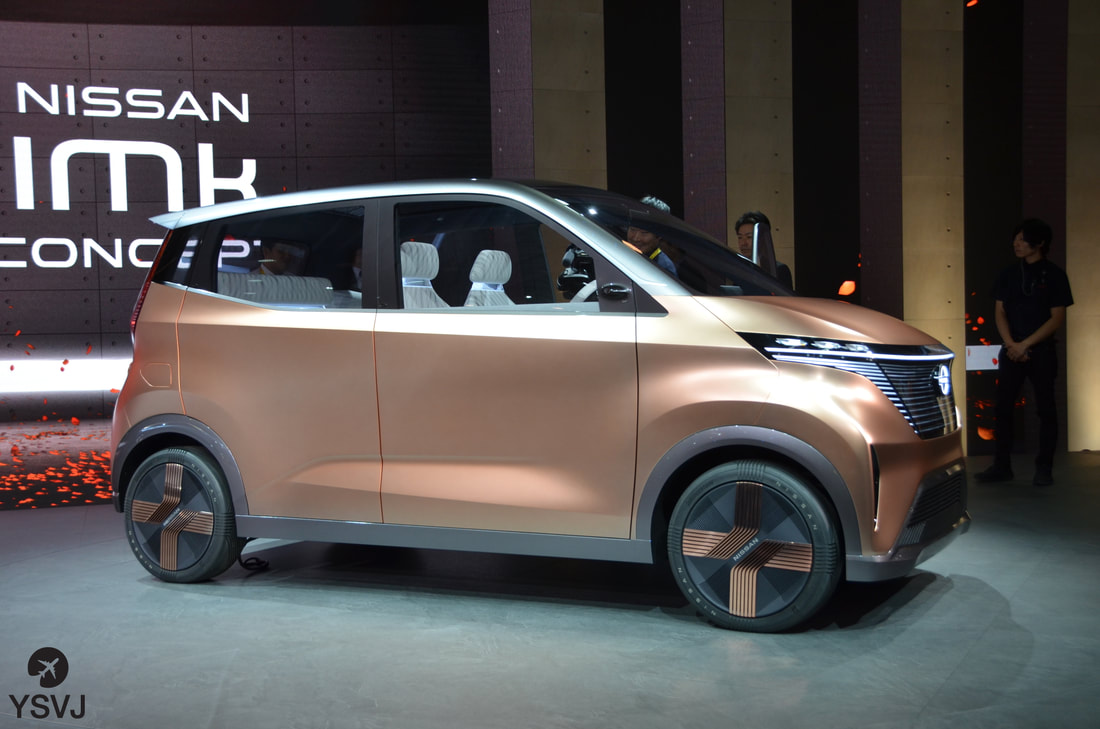 Likewise, the IMk (for Intelligent Mobility keijidousha) offers a future of driver-less valet parking, autonomous driving (Nissan's ProPilot 2.0 system, same as the Ariya), and even a personal assistant feature that reminds you of appointments that it transports you to, all in a kei-sized package. 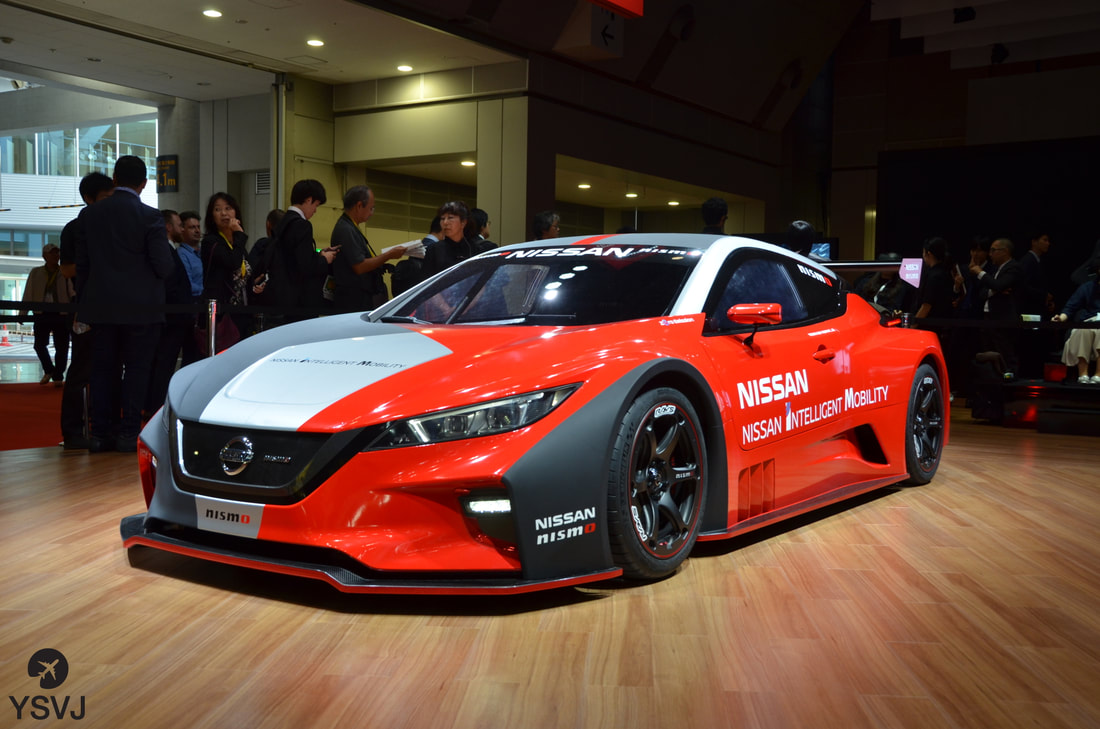 For the performance enthusiast, there is the updated Leaf race car. Which doesn't offer autonomous driving, we suspect.
Over at the Mitsubishi display, the MI-TECH concept was causing such a stir that I couldn't get a clear shot of it due to all the other journalists. But with no doors and no roof, it probably won't end up in your driveway soon anyway.
A Mitsubishi that probably will, however, was represented by their K-Wagon concept. Powered by a conventional internal combustion engine and CVT transmission, it boasts such safety features as lane assist, emergency braking, and "collision prevention assistance" which focuses on pedal misapplication, a problem that is becoming more common with the increase of older drivers on Japan's roads. Certainly hope the wheels make it into production. 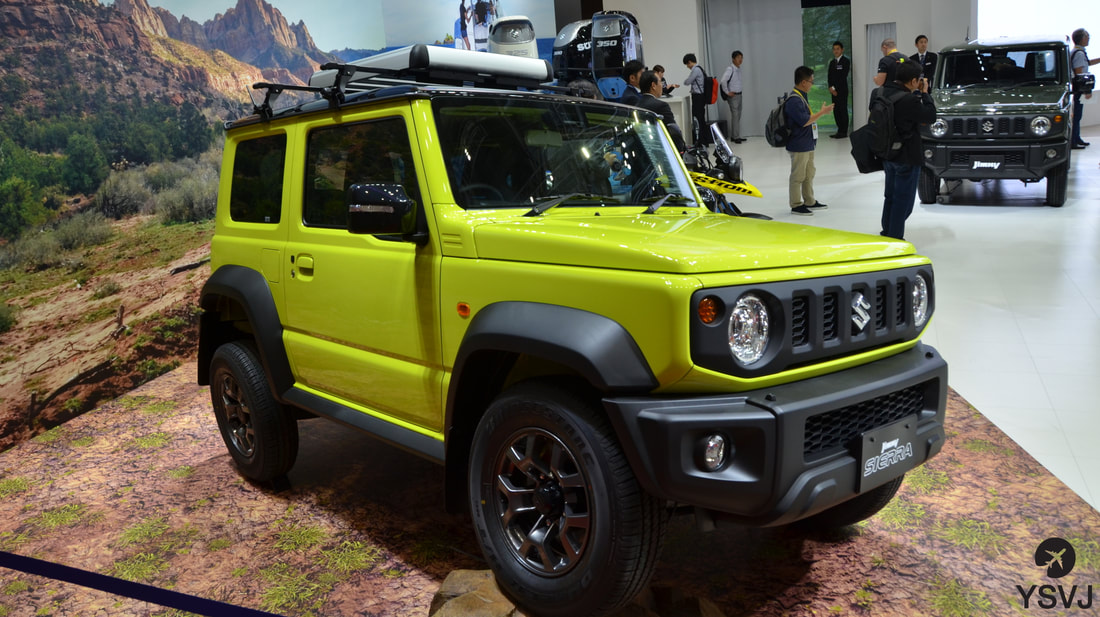 Suzuki's Jimny was represented by this new Sierra version, flexing its suspension strengths for all the ladies. The Jimny is so popular that if you ordered one now, the Tokyo Olympics will already be over before your new Jimny arrives in your driveway.
Suzuki is great with imaginative concept cars, but it also excels at innovative ideas for its production cars. One whimsical example is this Suzuki Every converted into a rolling child daycare center. Complete with privacy curtains, changing stations, and easy-to-clean interior surfaces, Suzuki is - much like the Japanese government - practically begging Japanese people to have more children. Have to admit that Suzuki's incentive plan is much cuter though.
Suzuki didn't reveal much about their Waku Spo concept, but that didn't keep it from being popular with photographers and film crews. It's a good looking coupe, and the rear doors appear to slide open like those of a van for accessibility. The outer rear view mirrors are replaced by cameras, not uncommon for concept cars. But having driven the Volkswagen XL1, I can report that they work great - until it rains.
The Hanare concept is a fully self-driving EV that was just one of the "rolling living room" concepts at this year's show. Perhaps the idea behind this approach to transportation is that you and your mates can leave the pub before the game is over, watch the rest of it while finishing your last round of pints, and safely arrive home before you wife starts throwing your football memorabilia out in the trash.

Totally guessing here.
Another manufacturer with a flair for fun concepts is Daihatsu. They didn't disappoint this year either. First up is the Waku Waku, with a hinged roof at the back, a tailgate that becomes a step or bench seat, and flat-folding rear seats, the Waku Waku can be anything you want it to be. 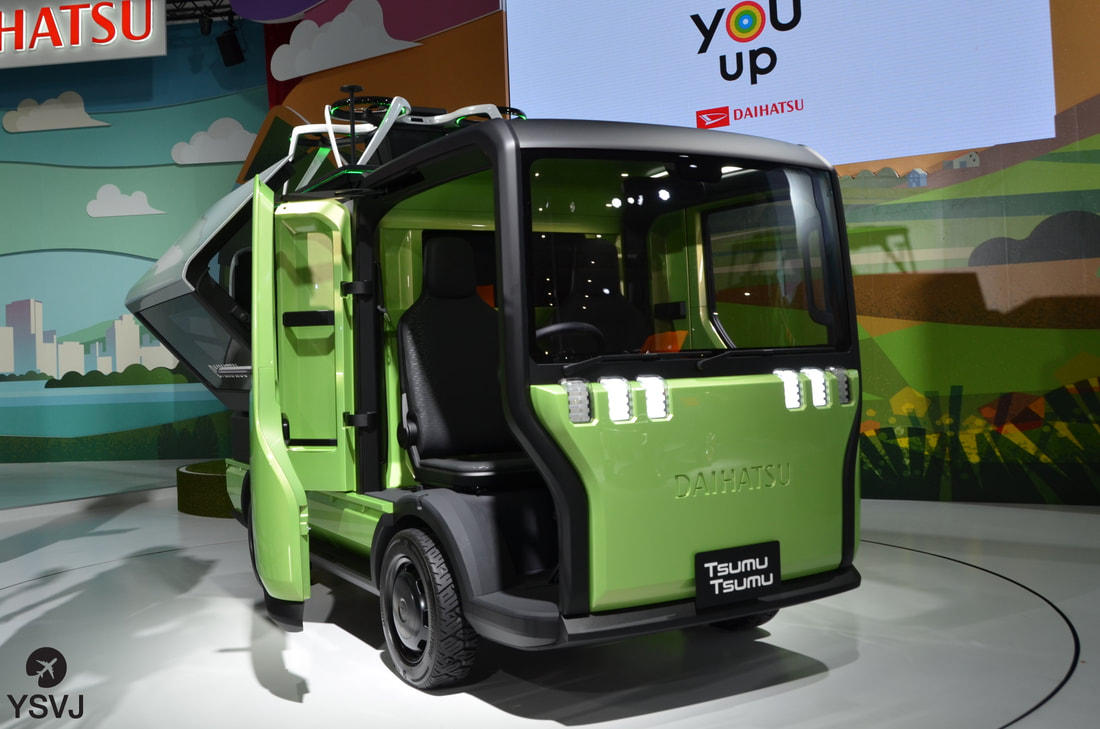 Likewise the Tsumu Tsumu, with its funky bi-folding front doors and rear bodywork that opens like an old cigarette box, you create what you want. Such as a drone-launching platform, shown here. 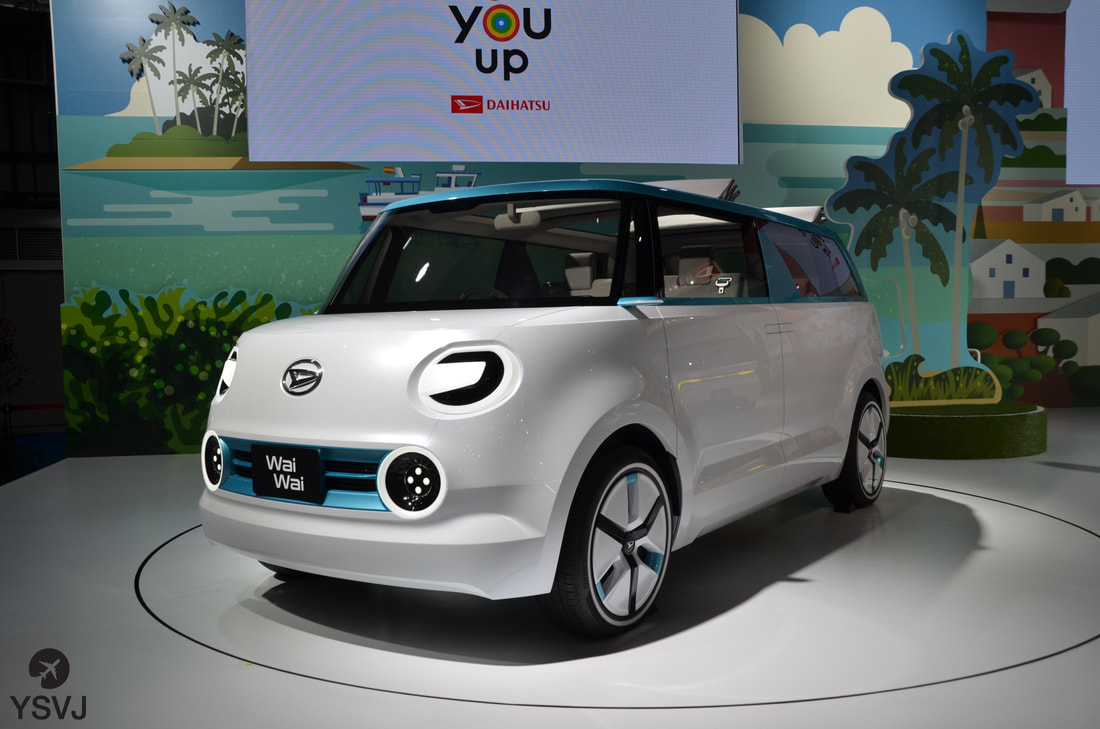 The Wai Wai (have you noticed a pattern yet?) concept offers flat-folding seats, dual Webasco-style sliding sunroofs, cool retro colors and even whitewall tires for a smooth nostalgic look. Is it headed for production? Kind of hope so, actually.
Subaru didn't have much of interest in their display, but the Viziv Adrenaline concept gave clues of the direction of their production cars. Sticking with their successful formula, obviously.
Hino has some cool ideas for commercial transport. This fully-autonomous EV platform can handle a wide variety of applications. Anything you can think of - a food truck, vending machine, even a hair salon - can be carried on its platform and located in any city environment. Great for businesses that travel to events. 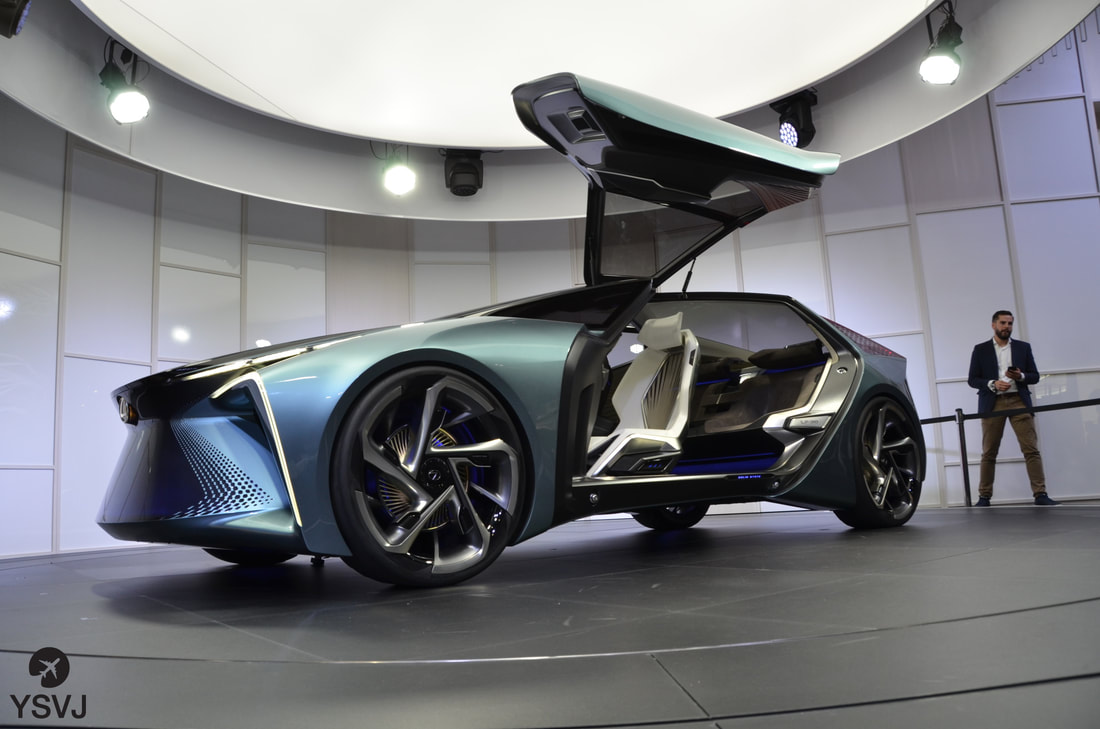 Lexus probably didn't get the attention they expected with their wild LF-30 concept. While the styling draws the eye in, the numbers (536hp, 500km range, 200km/h top speed) aren't exactly breathtaking in today's environment.
Not all the futuristic ideas were from the big name manufacturers, however. The Tokyo Motor Show also features many component manufacturers showcasing their big ideas, as well as smaller companies with big ideas for how to manufacture cars. One such example is the NCV from Kankyosho. NCV stands for Nano Cellulose Vehicle. Using materials that are full CNF or CNF-resin composite parts, cars can be made lighter and more efficient, and without metal, glass, or oil-based plastics. More environmentally friendly both in manufacture and use, in other words. 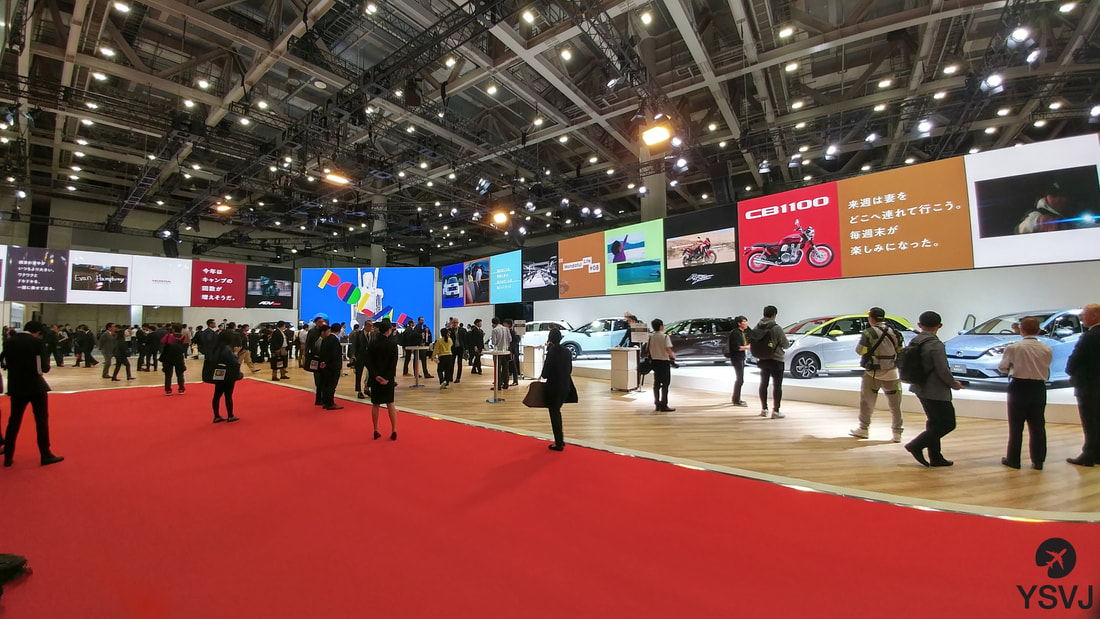 Honda had a huge display which not only showcased their ideas for the future, but also great memories of their past. 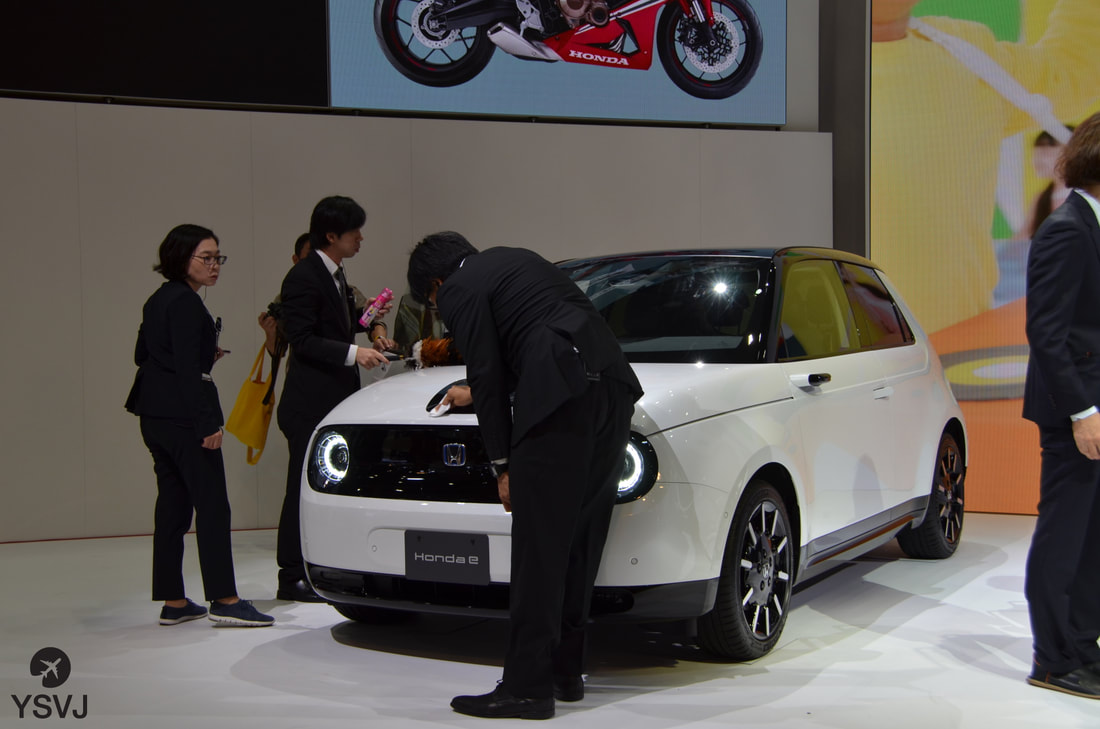 The Honda e is almost ready for production, so not surprisingly it was the center of attention. Whenever a scheduled film crew stepped away, the Honda staff jumped in to clean up any fingerprints. The two electric scooters next to it were practically ignored by comparison, even though they'll be seen (but not heard, haha) on the streets next year.
Honda also had an entire corridor dedicated to its history of past and current CB-series motorcycles, which have pretty much been setting the standard for motorcycles since 1959.
They also brought out Formula 1 cars and Moto GP bikes that can typically only be seen in their collection hall. Two that brought out an emotional response were Ayrton Senna's McLaren MP4/4 and Nicky Hayden's RC211V. Legends gone, but not forgotten.

Freddie Spencer, a legend who is still very much with us, was recognized with the NSR500 he rode to many victories. 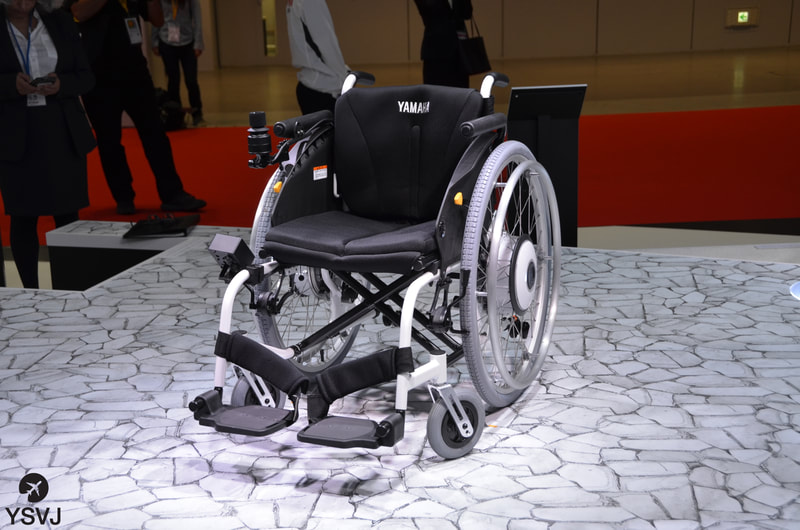 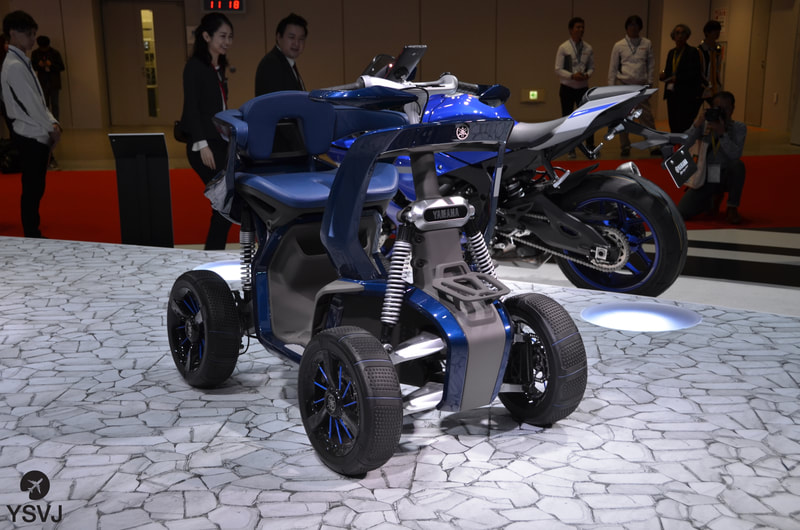 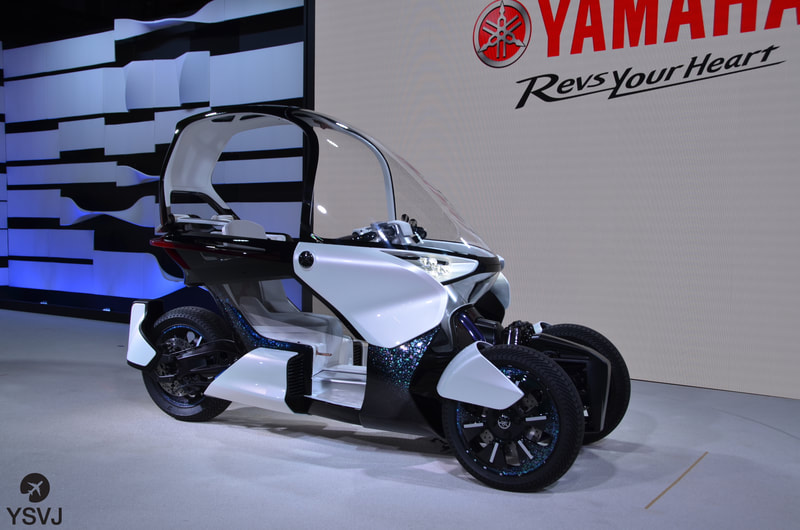 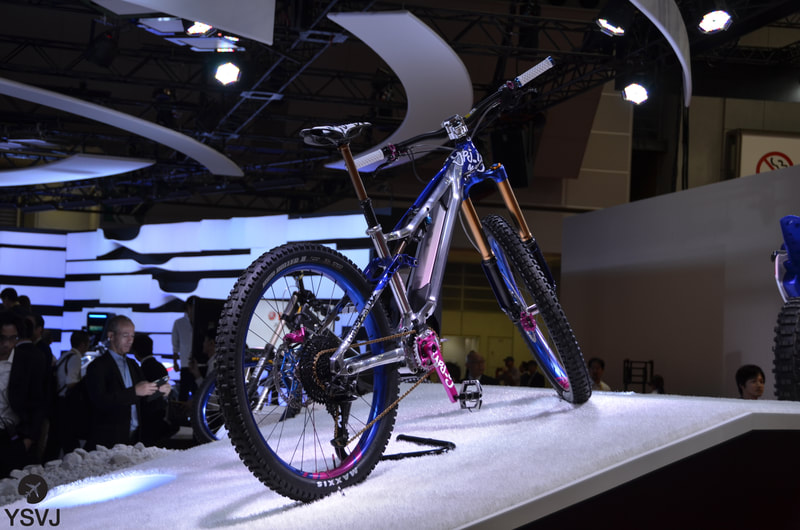 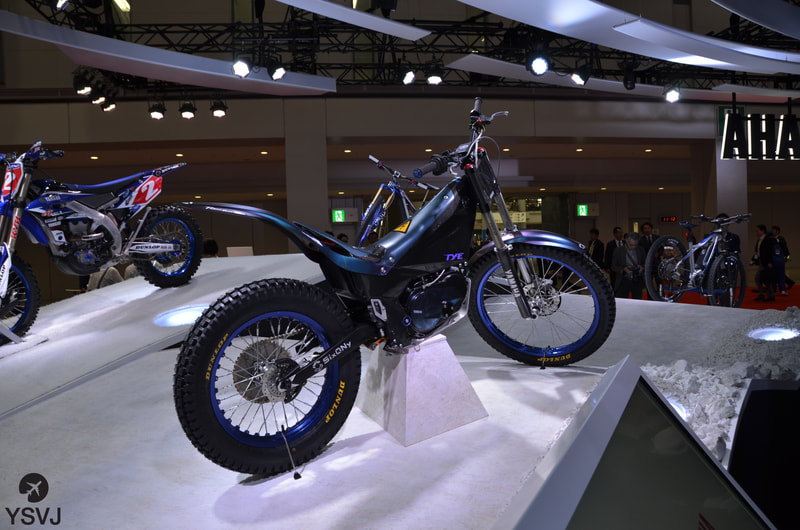 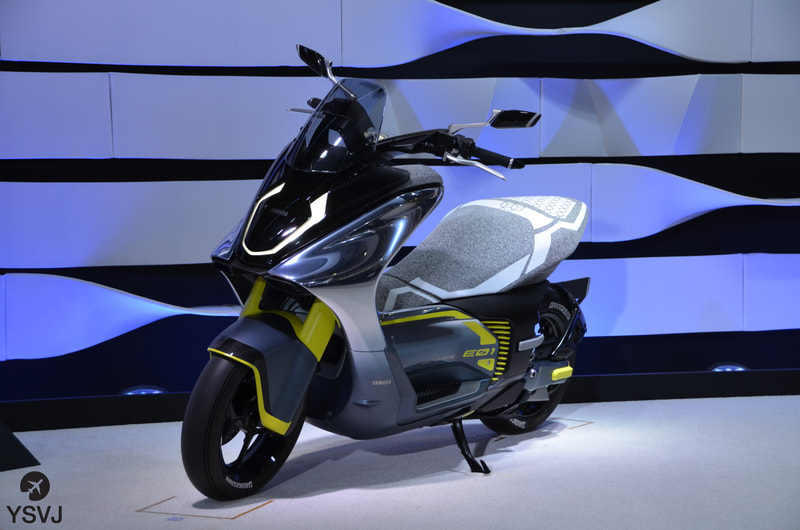 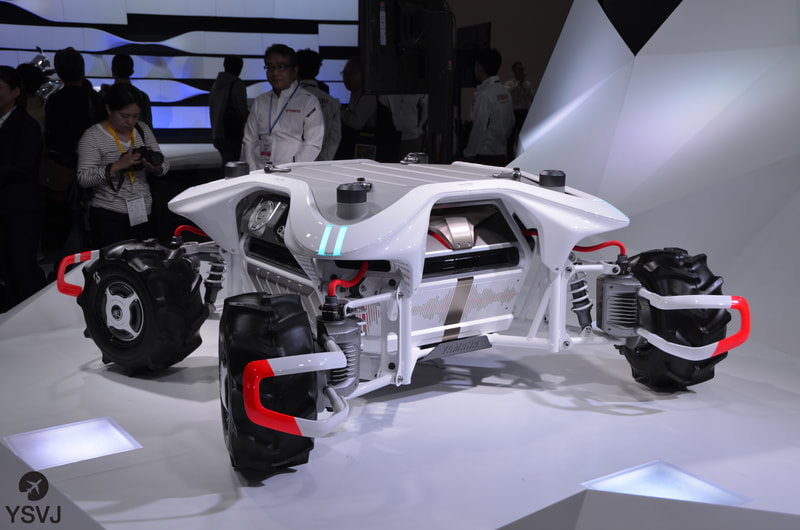 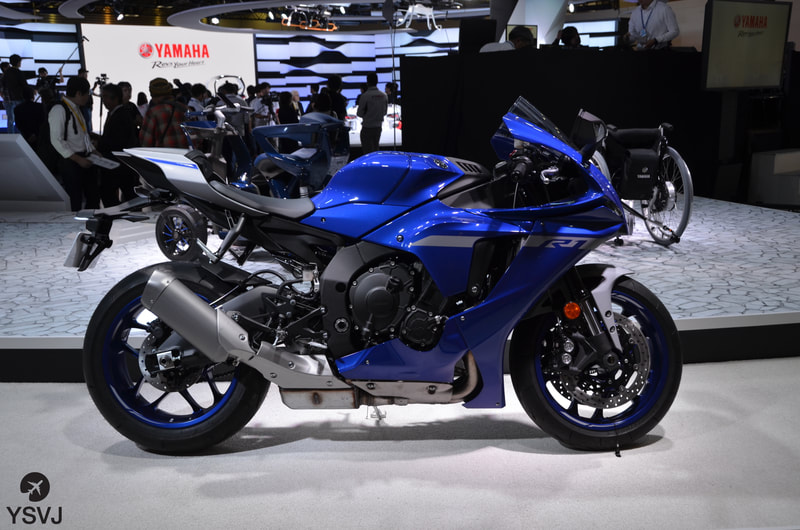 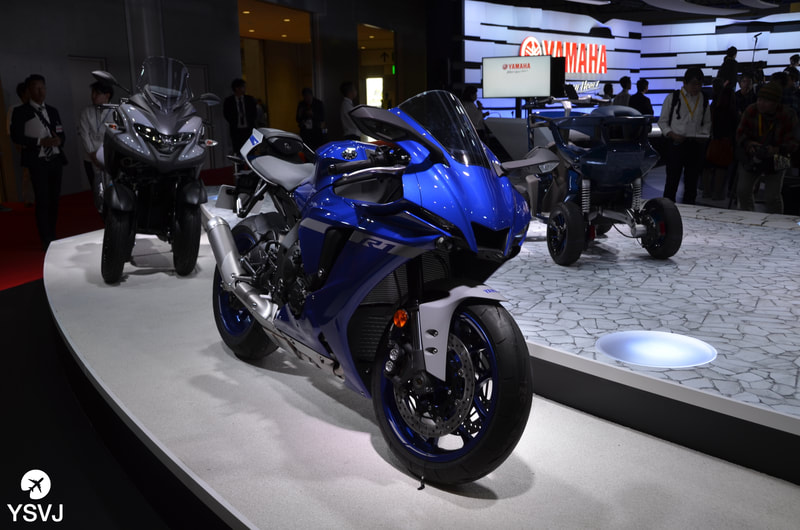 Bottom row, L-R:
Land Link Concept, an autonomous load-carrying crawler that can traverse almost any surface.
And in case you think Yamaha has lost its focus on motorcycles, an all-new R1 debuted at this year's TMS. Looks beastly.
Say goodbye to the beginner's favorite sportbike, the Ninja 250, and say hello to the ZX25R. Kawasaki revealed both it and its naked sibling, the 250 Assassin. Clearly aimed at Honda's CBR250RR, expect a price increase to pay for all the new tech. Bet it's a blast to ride, though. There was also the super-retro 500 Meguro K2 (complete with kick-start), and a new color scheme for their wildly popular Z900 retro standard.
Copyright © 2014-2021 www.YouShouldVisitJapan.com